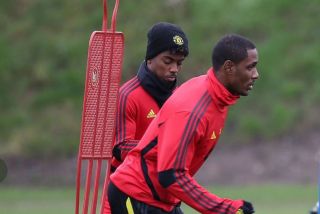 Odion Ighalo had a smile on his face during training which epitomises how happy he is to be at Manchester United.

Although it’s unlikely that he will be a starter in big games, Ighalo will have a role to play in all competitions between now and the end of the season.

He brings key Premier League experience to a very young side and has already got off the mark with a Europa League goal against Club Brugge.

Expectations aren’t too high on him either, which helps…

That said, it could turn out to be an important loan signing that pushes United towards a stronger league finish, or perhaps in the Europa League too.

While we haven’t actually predicted Ighalo to start against Derby County in the FA Cup fifth round tie on Thursday evening, there is a chance he could lead the line for United.

Solskjaer may use this cup tie to give Ighalo the minutes he needs to reach full match fitness.

The striker shared pictures of United’s training session and he looked happy.

Could this be a reaction to Ole telling him he’s in the starting line-up tomorrow? 😜