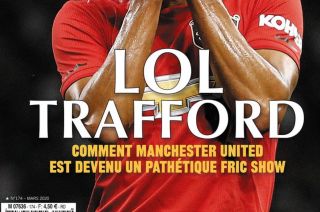 French football magazine So Foot published a scathing assessment of Manchester United from the beginning of Ed Woodward’s reign as executive vice-chairman.

It also reads, as seen below via @RedIssue: “How Manchester United became a pathetic money show”.

We don’t see Lingard score — or contribute to goals very often — but this joke is on United, not an academy graduate who really hasn’t performed well enough to warrant a place in the team this season.

Anyhow, back to the joke. Or Chief Clown perhaps.

Woodward is partly responsible for the big mess at United but the Glazers are far worse, and the ones who employ him in the first place. He is merely a puppet on a string.

The fans have had enough and in an ideal world would love the club to be in better hands.

The Glazer family, with the help of Woodward, seem only interested in milking the commercial cash cow dry. That’s how they see United.