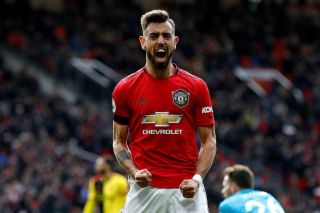 Ole Gunnar Solskjaer is not surprised by the impact Bruno Fernandes has already had at Manchester United.

There is an electric spark at Old Trafford again following the Portugal international’s arrival. He’s the closest thing we’ve signed to a proper Manchester United player in years.

Solskjaer says he was confident Fernandes would quickly settle.

“I’m not surprised,” Solskjaer said, as per Manchester Evening News. “Because I saw what he can do on the pitch and I saw his leadership qualities. If you do your due diligence and speak to people who know his personality, you hope he’d have this influence.

“I’m not surprised, but you couldn’t be 100 per cent sure. Some players take six months, but the point was to get him in because of the quality he’s got. He’s just relished it.

“He loves being around the place, he’s just come in with that aura about him that you need in players.”

To a degree, it shows Paul Pogba up. The World Cup winner has been out for most of the season with an ankle injury, but when fit his impact didn’t feel as big as Fernandes’, who appears to make an extra effort to look for the ball and will work a lot harder to make things happen.

Fernandes gets into dangerous positions and his new team-mates are already looking for him on the pitch, which is becoming more notable every time he plays.

The 25-year-old has scored three and registered two assists in six appearances since joining from Sporting Lisbon in January. To make matters better United are unbeaten with Ferdinand in their side.