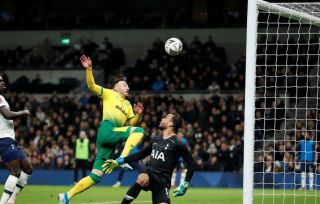 Manchester United will travel to Norwich City in the FA Cup quarter-finals of the Champions League as long as they beat Derby County tomorrow night.

Norwich went to extra-time tonight against Tottenham Hotspur — winning on penalties — as José Mourinho missed out on a quarter-final against his former club.

It raises more questions about the direction Spurs are set to take with Mourinho in charge. Tonight saw another bad result under the Portuguese tactician.

But we can’t talk too much about the quarter-finals with our fifth round tie taking place on Thursday.

Ole Gunnar Solskjaer won’t be counting his chickens before they hatch and he’ll expect the same from his players.

We’re all hoping for a good cup run this season and Solskjaer could do with adding a major honour to his CV.

That could also swing in his favour and buy him more time as manager — because there’s no denying that the rest of the season could go either way knowing how inconsistent United have been all season.

See the full draw below:

What fixture are you looking forward to? pic.twitter.com/RLRf37Qaiv

Fair play, Norwich. Hopefully see you in the quarter-finals.