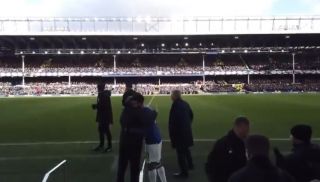 Ole Gunnar Solskjaer showed a touch of class as he exchanged a hug and a few words with Everton midfielder Andre Gomes at the weekend.

The Portugal international recently returned from a horror injury that we all thought would end his season, but he’s responded remarkably to it and is already back in action for the Toffees — making his return over a week ago against Arsenal.

He played against Manchester United in Everton’s most recent outing in a game that ended 1-1 with lots of controversy.

Everyone is happy to see Gomes back on the pitch, including Solskjaer, who acknowledged the player when he was substituted at Goodison Park on Sunday.

👏🏻Fair play to Ole Gunnar Solskjaer for coming over to Gomes after he got subbed off pic.twitter.com/ME4V3JSPTD

Ole Gunnar Solskjaer going over to Gomes after he got subbed off yesterday… Class from Ole 👏👏🇾🇪pic.twitter.com/mJiBfwN4PK

Check out the video above (Sky Sports Premier League had broadcasting rights to the game).

Gomes has come back at a good time for Everton, who under Carlo Ancelotti are getting results. I’m hardly going to compliment their style of play after the weekend, when they just launched high balls into the box for Harry Maguire to clear time and time again.

But from talking to several Everton fans they seem to be impressed by the Italian coach.