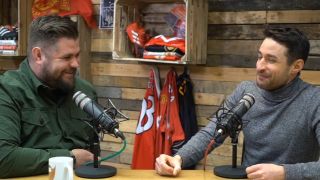 The Athletic journalist is reliable when it comes to transfer news — and on this podcast he talks about Jadon Sancho, James Maddison, Jack Grealish and other transfers — but he built his reputation at the BBC, preliminarily for having good contacts at Arsenal.

This interview follows up a series Howson has done with writers from The Athletic, including Oliver Kay, Daniel Taylor and Laurie Whitwell.

Ornstein goes into detail on a data United are using to identify transfer targets. He says Premier League clubs are leading the way on others, with Liverpool apparently being the best example.

Ultimately, United are looking to make fewer errors and maximise their ability to improve on-field results.

The well-respected explains that MUFC have been behind the curve and there is significant ground to make up. This basically means United are making steps they should have done a long time ago.

Howson makes a good point, suggesting Sir Alex Ferguson did more than a typical manager and acted like a Director of Football too. We often hear stories about players who joined United after being sold after a phone call from Ferguson. Ornstein agreed, stating that Fergie was the best DoF of his time.

It goes without saying that current manager Ole Gunnar Solskjaer doesn’t have that power and maybe the club should look at a strategy from behind the scenes.

In utter disbelief, Ornstein does not understand why United have yet to appoint a director of football. He says Rio Ferdinand and Patrice Evra — both touted for the role — would be laughed at for that particular role, by other members of the football world.

Those two are more suited to ambassador roles anyway.

Ornstein also states that United are fully behind Solskjaer, although there are “thoughts” on other coaches “if something was to change.” He goes on to claim that Mauricio Pochettino and Thomas Tuchel are admired by members of the hierarchy.

Watch the podcast in full below (h/t Stephen Howson):