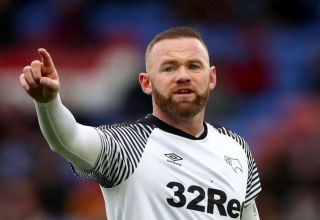 Shay Given thinks Wayne Rooney will show respect to his former club Manchester United on Thursday night when Derby County host the Red Devils in the FA Cup fifth round.

“We’re looking forward to Thursday,” Given told the Alan Brazil Sports Breakfast Show (talkSPORT). “It’s a huge game for everyone at Pride Park, and it’s a sell-out so it’ll be a fantastic night.

“And Wayne, he’s with us on Thursday so hopefully he can do some magic against Manchester United.

“It’s like the stars have aligned. It’s crazy to think he only came in January, the draw was made for the FA Cup and with all the teams that are left in we got Manchester United – it’s a bit of a fairytale, really.

“He’s got great history at Manchester United, of course, but for the 90 minutes or 120 minutes I’m sure he’ll want to get Derby through to the next round.”

It goes without saying that Rooney is a Manchester United legend — the club’s all-time record goalscorer, as well as England’s — but he will do his best in order to see Derby reach the next round of the FA Cup.

We can’t expect any less from Rooney — he’s a top professional and it’s incredible that he’s still playing at this level after so many years at the top.

He will be thinking about winning the FA Cup with Derby because that would be his character. Obviously, he has a lot of respect for United and we’d have no real issue if he did score and celebrate.

It’s up to him in that moment.

Rooney has four goals and two assists in 14 appearances for the Championship side and there’s always a chance he could find the net.

And Derby goalkeeper coach Given thinks Rooney will celebrate if he scores for the Rams.

“I think he probably will.

“Wayne is one of those people who just loved playing football and loves scoring goals and I think he will.

“I’m sure he will have some respect for his old club, but in the heat of the moment…

“I never really understand players who don’t celebrate, because even when I played outfield and scored in training I would do a little knee slide, just because when the ball hits the back of the net it’s a special feeling.”

Rooney’s a remarkable footballer — a true legend of the game — and we’re looking forward to seeing him in action against United later this week.

Not long ago you could have argued he’d still get into United’s midfield, though things are beginning to look up with players returning from injury and a man named Bruno Fernandes.

Fernandes would have fed goals to Rooney in his day.