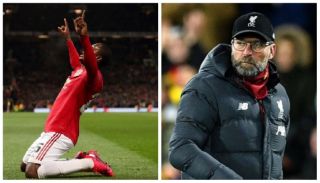 In what can only be described as “peak shithousery”, it has been revealed this evening that Manchester United’s Nigerian Prince Odion Ighalo’s signing was not actually to help with squad depth and the Marcus Rashford injury.

Ole Gunnar Solskjaer held crisis talks over Christmas with Sir Alex Ferguson and was instructed by Sir Alex to ‘do anything possible to stop them Scouse bastards winning that title’.

Sir Alex was said to be visibly outraged at the thought of Jurgen Klopp leading his Liverpool side to their first league title in recent memory, and had discussed numerous possible ways in which to try and disrupt their title charge.

It was only when a throwaway comment made by Ole about infecting them all with the Coronavirus, that Sir Alex came up with the master plan.

United would sacrifice Marcus Rashford for the rest of the season, claiming a fake injury had stricken him down until the summer, and in desperation, would need to sign a striker as soon as possible.

Ighalo’s agent was contacted and he confirmed that Odion had, in fact, caught the Coronavirus in China from a dodgy takeaway on a Sunday evening. Woodward was informed of this secret news and was brought in on the act, to make the transfer happen.

Ighalo’s instant reaction to the cunning plan was ‘I am a United fan, of course I will come to England and spread this virus. I would do anything to fulfil my dream of playing for United, and fucking up Liverpool’s season. Nothing would please me more than to see fake toothed Klopp’s dismay as the league was cancelled’.

Without hesitation, United convinced the Chinese club to allow Ighalo join on loan for the remainder of the season, and so he arrived in Manchester.

Although Ighalo has been pictured in training every day, what hasn’t been noticed is that afterwards, he is whisked away to Liverpool and allowed roam the streets, coughing on everyone, in a dastardly Corona-attack on the city.

With the recent confirmation that if the Coronavirus does indeed spread that Liverpool would likely not be hander the title, Ighalo has now upped the ante and began coughing into envelops and mailing them to Anfield.

In the most recent evidence of this, he posed as a 10-year-old boy, asking Jurgen innocently to lose some games. Jurgen thought it was a touching, cute moment, not knowing that he had been duped by Ighalo, and has now got the Coronavirus, which has spread and they have since lost to Atletico and most recently an embarrassing bumming by Watford.

The plan seems to be working, and we are certain that this effort by Odion Ighalo will result in a statue outside Old Trafford in due course.

Our Nigerian Prince, scorer of goals, infecter of scousers, saving the world from a Liverpool title win.