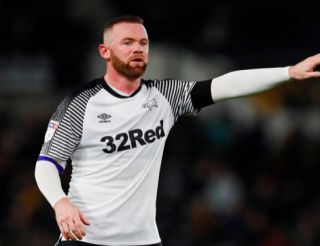 Manchester United travel to Pride Park to face Derby County on Thursday in the fifth round of the FA Cup.

Ole Gunnar Solskjaer’s side remain unbeaten in eight games and can continue their momentum with victory over the Championship outfit.

Fortunately, there are no replays from the fifth round onwards so there is no danger of another fixture to clog up United’s calendar further.

But the Reds should be looking to get the job done in 90 minutes and we expect Solskjaer to name a relatively strong line-up, despite the fact that one eye is on the pivotal Manchester Derby on Sunday.

Here are three things for you to watch out for ahead of Thursday’s game:

There’s no surprise that this game is being dubbed the ‘Wayne Rooney’ cup tie. All eyes will be on the United great and it will still be strange for fans to see a former idol spearhead a much weaker outfit. The 34-year-old has moulded into a central midfield player under Phillip Cocu since his move in January. Rooney will be involved in a midfield tussle with the likes of Fred and Scott McTominay, but will fancy his chances from set-pieces where his most effective quality still remains. Rooney will be desperate to score against his former side.

United are still fighting on three fronts this season, and in a best case scenario, win the FA Cup, Europa League, and finish inside the top four. But Solskjaer will realise that with his stretched squad that this ambition is not realistic, and the focus has to be on returning to the Champions League. The Reds have a fantastic chance to do that in the league with Chelsea and Tottenham continuing to falter, and the possibility of fifth place also qualifying for Europe’s elite competition due to Manchester City’s ban. Easier said than done, but United just have to remain consistent between now and the end of the season if they want to finish in the top four in the league.

Therefore you would expect Solskjaer’s sights to be firmly fixed on the Manchester derby at Old Trafford just three days later. A win against Pep Guardiola’s side would put United in a great position with more desirable fixtures to come, and he must have his best possible side to give the Reds the best chance of winning. But the Norwegian can also not underestimate Derby and will want to avoid losing momentum by ending their eight match unbeaten run.

Solskjaer will undoubtedly utilise his squad players on Thursday, but the strength of his side will be a large indication of the importance he places on this piece of silverware.

Anthony Martial missed last Thursday’s clash against Brugge at Old Trafford through injury but returned in the weekend against Everton. The Frenchman almost played a full 90 minutes at Goodison Park, but failed to influence the game after being left isolated in a split striker system. Odion Ighalo missed a golden opportunity to win the game in the closing moments, but we feel he should start at Pride Park on Thursday. Solskjaer needs Martial at full fitness for the derby this weekend and shouldn’t risk his key attacker ahead of such an important game. Ighalo has shown some competence up top for the Reds since his deadline day arrival, and will back himself to get on the scoresheet against Championship opposition.