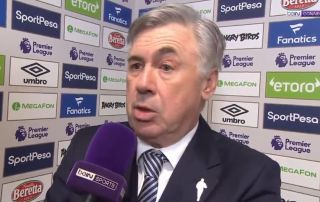 Carlo Ancelotti let his emotions get the better of him yesterday as he angrily approached referee Chris Kavanagh for overruling an Everton goal in stoppage time.

The Italian was sent off for his actions but still gave Sky Sports a post-match interview.

“I have a lot of things to say,” Ancelotti told Sky Sports, as quoted by TeamTalk. “I asked the referee to explain after the game and he sent me off, then I spoke after with him — I will keep our conversation private — but it was a situation if Gylfi [Sigurdsson] was offside but in our view he didn’t affect the vision of [David] de Gea.

“As I say the vision was clear but it was offside — you have to decide if the vision [of De Gea] is affected or not and every0one knows the decision can be viewed differently.”

Looking back at Sigurdsson’s portion for the disallowed goal, he actually moves his legs away at the last second, so we don’t really buy that De Gea could see what was happening.

He would’ve likely conceded it anyway but Sigurdsson was still in a offside position.

Ancelotti doesn’t regret anything he said to the referee.