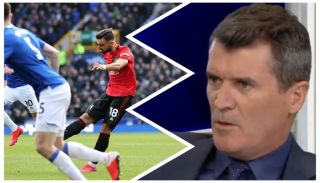 Former Manchester United midfielder Roy Keane was speaking after the 1-1 draw with Everton at Goodison Park.

He provided his assessment of the draw and issued a warning to the United squad.

The Reds went into the game open the back of an unbeaten run of seven games in all competitions. They secured a point but it got too close for comfort at the end.

The opener was scored by Dominic Calvert-Lewin — after David de Gea kicked the ball straight at the Everton striker before it bounced into the net.

Bruno Fernandes, however, was able to sniff out an equaliser from distance just before the interval.

Everton were better in the second half and almost got their reward. They had set-piece after set-piece but Harry Maguire stood tall and make sure everything was cleared away.

A potential second goal from Calvert-Lewin was ruled out by VAR as Gylfi Sigurdsson was interfering with play and in a offside position.

Whilst we are all in agreement that the decision was correct, Keane was still unhappy with the way United performed in the second half.

He told Sky Sports (quotes via Manchester Evening News) after the match: “It’s a worry (United waiting for a spark from Fernandes) because he’s new to the club.

“What United lacked in the second half was real quality. You can make excuses about them playing during the week but it was at home and comfortable enough (the win over Club Brugge).

“(Anthony) Martial was non-existent today and the boy (Mason) Greenwood is learning his trade.

“You cannot just hang your hat on Fernandes all the time. He needs more support around him.

“We didn’t see that and it’s too strong to say that it’s a backwards step but I was concerned with what I saw from United in the second half.”

United have been crying out for a player like Fernandes all season long.

Now that he’s come we are over-reliant on him. Is this a fair assessment from Keane?