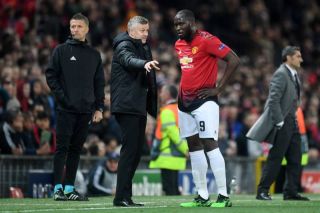 Former Manchester United striker Romelu Lukaku told teammates to ignore the manager’s instructions in last season’s 4-0 defeat against Everton, according to The Athletic.

The Red Devils were better this time around, managing a 1-1 draw against the Toffees in an away fixture that has always been deemed a difficult trip.

Last season at Goodison Park was the lowest point for Solskjaer yet. United just didn’t show up and it was really disappointing.

At the pre-match press conference for yesterday’s game, however, Solskjaer made it clear the boys wouldn’t give up like they did last season.

The Athletic believes that there were certain players being disruptive, with Lukaku being by far the worst offender.

He wasn’t happy with his situation at the time and pushed for a move away from Old Trafford.

‘Once I learned that Solskjaer planned to put me on the wing, then I knew my time at Manchester United was over’, Lukaku told Corriere dello Sport (cited by GOAL).

Disputes between coaches and players happen. It doesn’t always mean that they must go their separate ways, but that’s what happened to Lukaku and he jointed Inter Milan in the summer.

What is shocking about The Athletic’s claim is Lukaku’s lack of professionalism in trying to spearhead an on-pitch protest by encouraging his teammates to disregard orders from the manager.