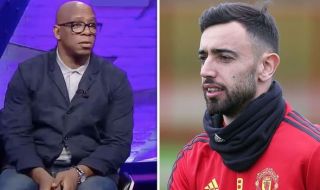 Bruno Fernandes is going to get better at Manchester United when his team-mates get used to how he plays, according to Arsenal legend Ian Wright.

The 25-year-old has made an impressive start to life at Old Trafford since his move from Sporting Lisbon in January.

Fernandes has three goals in his first six matches for the Red Devils and he’s already living up the hype he came with. In fact, I don’t think anyone thought Fernandes would be this good in his first month at the club.

He scored his third goal in the 1-1 draw with Everton on Sunday. An equaliser from long distance just before the interval and Wright believes Fernandes is only going to improve on his excellent start to his career in England after quickly adapting his game.

“He’s put up massive numbers in Portugal and everyone thought ‘well, it’s just the Portuguese league,” Wright told Match of the Day 2 (h/t Metro). “What will happen as time goes by is his team-mates will get used to him and what he can do.

“Look at how sharp he is, this is what Man Utd weren’t doing before.

“Everything was so slow and methodic.”

We have been delighted with the new arrival’s impact, and his attitude as well as work ethic has been a big boost for everyone in the team.

United are back in action on Thursday night in the FA Cup fifth round at Derby, where Fernandes is likely go get his first start in the competition.

The Red Devils stayed in fifth after Sunday’s draw at Everton.