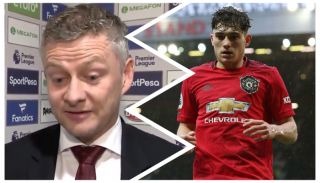 The Man Utd manager was asked about the inclusion of Anthony Martial, who missed Thursday’s 5-0 win over Club Brugge after picking up a knock in training the previous day. Solskjaer said the Frenchman was ruled out of the squad as a pre-caution and could have played the game, hence why he starts against the Toffees.

Although he could do with a rest, James has been ruled out of the match with an injury he sustained against Brugge on Thursday.

His form has dipped lately but this is a young player in his first Premier League season.

The boss, however, says it’s nothing to worry about and expects James back soon.

After last season’s defeat at Goodison Park, all players have a point to prove and Solskjaer agrees with that, as seen in the video below (courtesy of MUTV):