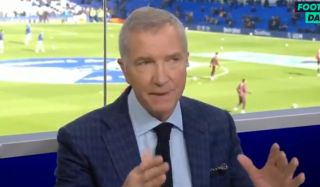 Graeme Souness does not consider Paul Pogba to be a friend. Let’s start with that…

Time and time again the former Liverpool hatchet-man has hit out at the French midfield.

So much that nobody will be shocked to hear him rant about Pogba again.

In today’s rant Souness made the acquisition that Pogba does not want to play for Man Utd.

Pogba is nearing a return from an ankle injury that required surgery at the start of the year. He has made just 8 appearances so far this season and there is a lot of uncertainty surrounding his future, with Mino Raiola speaking out against manager Ole Gunnar Solskjaer.

Now Souness believes there is more to Pogba’s spell on the sidelines.

“Maybe Man Utd should be looking at the medical staff here at Goodison [Park],” Souness told Sky Sports (via the Mirror). “They got [Andre] Gomes back in a fraction of the time in what would appear to be a far worse injury.

“Paul Pogba I see him dancing at a wedding, I see him shooting hoops, and just the cynic in me feels he doesn’t want to be at United.

Fellow pundit Roy Keane responded: “He thinks he’s at a fashion show or something.”

‘I see him dancing at a wedding, I see him shooting hoops. Just the cynic in me thinks he doesn’t want to play for Manchester United.’

🚨 Graeme Souness having a go at Paul Pogba klaxon 🚨pic.twitter.com/gfSpay3w1t