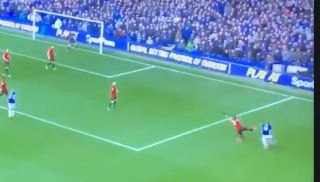 Anthony Martial isn’t usually one to work his socks off.

You see it at games but when he makes up for it in front goal we tend to completely forget about it.

There is footage doing the rounds now to prove that Martial does indeed work off the ball and track back to help his team-mates defend goalscoring opportunities, as seen against Everton.

In the video below (footage courtesy of Sky Sports Premier League), Martial can be seen running into United’s own half to defend a cross into the box.

He did so successfully, with Everton winning a corner that resulted in nothing.