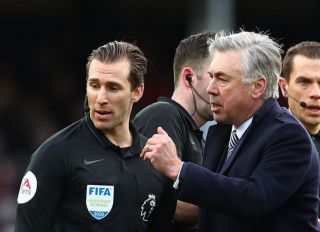 Everton manager Carlo Ancelotti was sent off after the full-time whistle was blown today at Goodison Park.

The Italian was angry having seen his side denied an injury time winner after a VAR review.

He was shown a red card and ordered to leave the pitch — even though the match was over, as seen in the pictures below via BT Sport.

You know it’s bad when Carlo Ancelotti loses his temper 😳

The Everton manager saw red at full-time after VAR ruled out a late goal for the Toffees… pic.twitter.com/q43xwePkQw

The footage has been shared on Twitter by Soccer AM, courtesy of Sky Sports, as seen below:

Do YOU think it was offside? 🤔 pic.twitter.com/ho43GPdda8