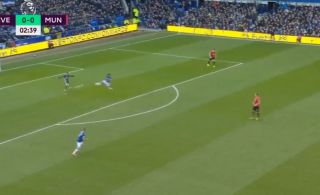 David de Gea was at fault for an absolute howler at Goodison Park.

The Manchester United goalkeeper had the ball at his feet and was looking for a pass before kicking it straight at Dominic Calvert-Lewin, who claimed the goal for the Toffees.

De Gea took far too long and allowed the Everton striker to close him down.

United should be 2-0 down — only stopped by a terrific De Gea save — although Calvert-Lewin looked to be offside (flag stayed down).

They face an uphill challenge now to get three points from this game, which would go a long way towards building momentum and the fight for a Champions League spot.

We expect better from De Gea, who is up there with the best goalkeepers in the world, but this was extremely poor.

Game plan out the window after a shoddy start.