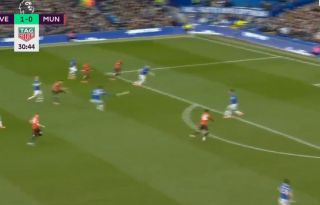 Bruno Fernandes is making his mark in some style for Manchester United.

The Portugal international has scored his first goal from open play for the club with an absolute cracker against Everton.

Jordan Pickford’s positioning was questionable to say the least — but credit to Fernandes for being bold enough to have a go from so far out.

Pickford wasn’t the only keeper at fault today, of course, with the scoreline now 1-1 at Goodison Park.

He’s barely been at the club a month and Fernandes has two Premier League goals to his name.

But this one was the best of his first three United goals!

Watch below as Fernandes smashes the ball past Pickford from distance to make it 1-1 (footage via Sky Sports Premier League/RMC Sport 1):

"Gareth Southgate is watching, you're not impressing him."