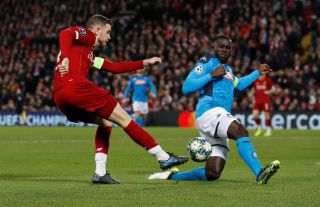 If Manchester United plan to get back to the top, then the club will surely need to spend big and wisely in the transfer market. The standard of recruitment was way below bar before Ole Gunnar Solskjaer got the job.

One area that has improved under Solskjaer is United’s defence — following the arrivals of Harry Maguire and Aaron Wan-Bissaka last summer.

That said, it could still do with some added quality.

Unless Eric Bailly can stay fit and prove himself, Solskjaer should dip back into the market for another centre-back to partner Maguire.

There’s one at Napoli who would be the perfect fit.

And according to Corriere dello Sport (cited by Caught Offside), the highly-rated Kalidou Koulibaly could be available for £90m, and United are said to “command the operations”.

United looked at Koulibaly before but Napoli were chasing over £100m for their star player, as per The Sun.

The 28-year-old would bring more than experience and steel to United’s back four. He’d bring pace — which in the Champions League will be needed alongside Maguire, who has been a success since arriving at Old Trafford.