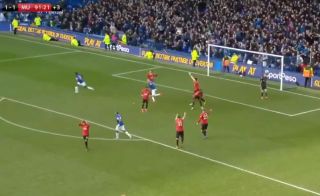 Phew. That was too close for comfort!

After scoring a first-half equaliser Manchester United appeared to shut off.

Everton had a number of opportunities to score — especially from set-pieces — but the Red Devils stood tall and managed to come away with a point.

Everton scored a goal in stoppage time — only for the goal to be overruled by VAR.

Richarlison can be seen interfering with play whilst grounded as Dominic Calvert-Lewin put the ball past David de Gea for a second time this evening.

Incredible drama at Goodison Park!#EFC think they have won it but VAR rules that Sigurdsson is offside!

Should the goal have stood? 🤔 pic.twitter.com/y8U9H29FGJ

Everton scores, but it's called back. pic.twitter.com/qZkEAJ4uCK

Thankfully, the goal didn’t stand and United hung on for a point.

VAR — whether you are in favour of it or not — made the correct call.

Check out how United fans reacted to the call below:

Probably the right decision, but Everton deserved that goal.

Disallowed. The right call for me IMO.

You can see from the reactions above that United fans were on the edge of their seat at the end, fearing the worst, and thinking we’d been caught against the run of play at the very end.

Thank you, VAR! Thank you!