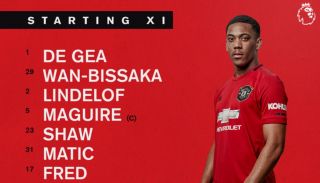 As confirmed early by Jonathan Shrager, Anthony Martial starts against the Toffees despite missing Thursday’s 5-0 win against Club Brugge in the Europa League. The former Stretty News TV host was also spot on about the inclusions of Mason Greenwood, Scott McTominay, Nemanja Matic and Victor Lindelof.

United are looking to build momentum with a win can also do something they haven’t done for over two years — by winning three games in a row without conceding a goal (last done in January 2018).

David de Gea is back between the posts with what looks like a back four in front of him, consisting of Aaron Wan-Bissaka, Harry Maguire, Lindelof and Luke Shaw.

McTominay keeps his place in the middle alongside Matic and Fred.

The question marks over places in this United side are beginning to be answered. Bruno Fernandes came in January and is already a key player, and his influence sees this team tick in the final third.

Our Portuguese playmaker is #MUFC’s Player of the Month for February!

The Portugal international starts along with Greenwood and Martial.