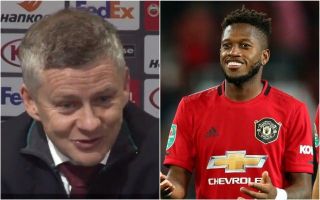 Ole Gunnar Solskjaer jokingly admitted he thought it would be long time before he saw Fred score a goal for the club.

The Brazilian midfielder netted a surprise brace against Club Brugge in the Europa League last night. He scored for the first time since scoring against Wolves last season.

Fred doesn’t get many goals so we were delighted to see him bag two last night.

READ MORE: Video: Mignolet does a Gerrard and slips when taking goal kick against Man Utd

In the video below of Ole Gunnar Solskjaer’s post-match press conference (via Hayters), the manager admits he and Fred have had a long-running joke between themselves about his goal return, but the former Shakhtar Donetsk will now need to prove the Norwegian and score more often than one per season.

“I wasn’t sure if I was going to be alive the next time he scored a goal!” 😳

Ole was just as shocked as everyone else inside Old Trafford to see @Fred08oficial's name on the scoresheet! 😂⚽️ pic.twitter.com/lYdyMXc3EH

It’s great to see Fred add goals to his game.

He has been patient with himself in terms of settling into English football. Now Fred is an important part of the team.