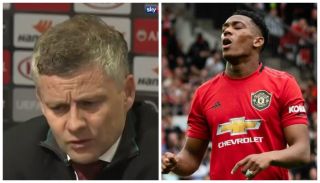 Goals from Bruno Fernandes, Odion Ighalo, Scott McTominay, and two from Fred sealed a 6-1 aggregate win to advance to the round-of-16 (draw will made later today).

It’s not often we’ve seen United look so clinical in front of goal — and that has a lot to do with the impact of new boy Fernandes, so they’ll be pleased with their performance and finishing.

But on the other hand, Martial has joined Marcus Rashford on the sidelines due to injury, as confirmed by Solskjaer before the match.

He went on to elaborate in his post-match press conference, as seen in the video below (footage courtesy of Sky Sports):

“He had a fitness test this morning”

Solskjaer revealed that Martial failed a fitness test on Thursday morning ahead of the game and wasn’t considered available.

He added that it’s not a hamstring injury, but more of a muscle problem around the thigh and knee area. The manager didn’t want to give too much away and claims to not know how long Martial will be out for.