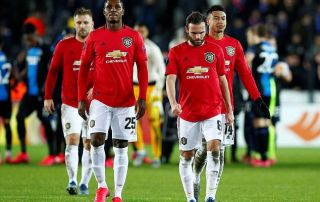 While everyone continues to rave about new signing Bruno Fernandes, other midfielders are starting to show signs of improvement and that could be down to the Portugal international’s influence on the team.

There’s a bit of positivity surrounding Man Utd again and Juan Mata rolled back the clock with a brilliant performance last night.

The Spaniard set the tone early with a powerful shot from long-range as United won the game 5-0 (6-1 on aggregate).

He created six changes throughout the game, more than any player on the pitch, and his performance shows he too can impact games more with Fernandes on the pitch.

The Portugal international was next highest for chances created on three — but only played 64 minutes — which was the total amount of chances created by our opponents on the night.

It’s clear that these two players see the game in a similar way and are able to combine. If they can form a positive partnership in the final third between now and the end of the season, Mata stocks will rise.

On a night where it all came together for the World Cup winner, United fans reacted to his performance on social media as seen below:

Bruno is bring out the best in Mata#MUFC

The link up between Mata and Fernandes has been so good to watch. #mufc