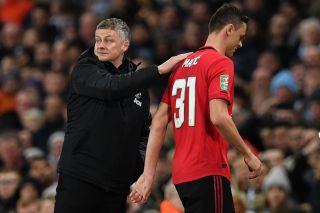 Ole Gunnar Solskjaer is a “much better manager than one year ago”, according to Manchester United midfielder Nemanja Matic.

Solskjaer replaced José Mourinho as United boss in December 2018 and won 14 of his 19 matches as interim manager. Then was then appointed permanently in March, but is record in charge changed dramatically towards the end of last season and the Red Devils currently sit fifth in the Premier League.

Man Utd finished sixth last season — 32 points behind champions Man City — but we are well aware that work needs to be done. The question is can Solskjaer hang onto his job and remain in charge next season?

United are enjoying their best period under the Norwegian, amid reports the club has held talks with Mauricio Pochettino, with five wins and six clean sheets from their previous seven games in all competitions.

Asked if Solskjaer has grown as a manager, Matic said (via Sky Sports): “Of course, every day he is improving for sure. He is getting more experience and he will get better and better.

“He is a much better manager than one year ago in my opinion because now he knows all the players, he knows exactly what he needs to do before the games, so I think for his job the experience is very important.”

The timing is convenient for Matic now that he’s playing well — but this is more a sign of the players being upbeat over results. United are defending better with the Serb back in the team, but cannot afford to get complacent between now and the end of the season.

United still have a lot to play for this season. Solskjaer could even end up winning silverware, with the Reds still involved in the Europa League and FA Cup. Not to mention the ongoing fight for a place in the Premier League’s top four.

Matic added: “Top four is still the aim for us because we still don’t know what’s going to happen with Manchester City. We’re going to play to finish in the top four and this is our target at the moment.

“I think we have enough quality to finish in the top four. We just need to continue to play like we’ve played in the last five or six games.

“Even the games when we didn’t play well we won and we have to keep that going because you don’t need to always play great to win. I’m confident and I think the guys are also confident that we can finish in the top four.”