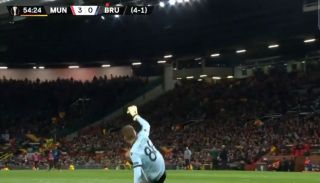 Not for the three goals he conceded, and especially not when he clashed into Tahith Chong, but when the ex-Liverpool goalkeeper slipped whilst taking a goal kick.

Almost reminiscent to when Steven Gerrard slipped against Chelsea as Liverpool’s title hopes faded in 2014, Mignolet lands on his behind and everyone laughs at his expense.

Check out the funny clip below (footage courtesy of FOX Sports/Reddit):

Mignolet slips when taking a goal kick from r/reddevils

As reported by Manchester Evening News journalist Samuel Luckhurst, the Stretford End chanted “Are you Gerrard in disguise?” at the former Liverpool shot-stopper.

'Are you Gerrard in disguise?' the Stretford End asks Mignolet.