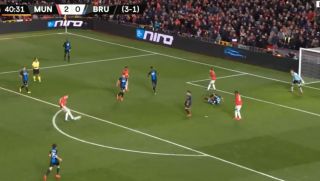 Scott McTominay has marked his return to the Manchester United line-up with a stunning goal to make it 3-0 before half-time.

The Scotland international has had a huge influence on the team this season and his absence was certainly felt.

It’s great to have him back in the team and scoring goals.

McTominay found himself in the right place at the right time when Fred’s pass came across the box.

He opened up his body brilliantly before carefully stroking the ball home, as seen below (footage courtesy of RMC Sport):

That will give McTominay a deserved boost because you can tell he has missed playing games.

United are stronger with him back so hopefully now we can push on to finish in the top four — as well as win the Europa League.