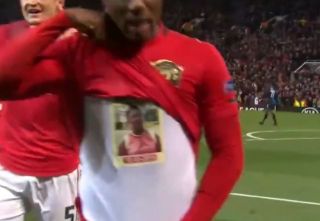 Odion Ighalo is off the mark for Manchester United.

After scoring against Club Brugge in tonight’s Europa League clash, the Nigerian striker revealed a print of his sister on the t-shirt beneath his jersey.

His passing came as a surprise to Ighalo and his family at the end of 2019.

BT Sport shared Ighalo’s celebration on Twitter, and you can see it meant a lot to him.

A lovely tribute from Ighalo ❤️

The forward dedicates his first Man United goal to his sister who recently passed away pic.twitter.com/fP8V9nQNzR

Ighalo is living his dream now playing for United and we are delighted to see him score his first goal for the club.

As things stand all British teams will progress in the Europa League tonight.