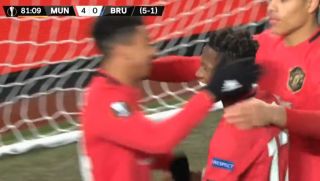 Credit to Jesse Lingard who showed intensity to win the ball back and for being unselfish when he could have gone for goal.

There’s no way back for our Belgian opponents now with the clock ticking down and United winning 5-1 on aggregate — one away goal from the first leg in Bruges.

READ MORE: Video: Mignolet does a Gerrard and slips when taking goal kick against Man Utd

In fairness to Ole Gunnar Solskjaer, United have been lethal in attack tonight and it was fantastic to see Odion Ighalo score his first goal for the club.

Then Nigerian dedicated his first goal to his late sister who passed away late last year.

Anyhow, Fred did well to stay calm and finish from close range.

Check out the goal below (footage courtesy of RMC Sport):

The Brazilian has improved vastly on the form he showed previous to this season.