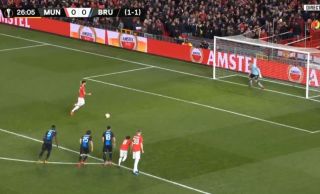 Bruno Fernandes has scored his second goal for Manchester United.

Like his first goal for the club, the Portugal international did a Jorginho-esque penalty-kick and showed great technique.

He really is a top drawer football and he wasn’t put off by the long wait to take the penalty.

It occurred when Brugge star Simon Dele saved to stop an effort on goal with his hand.

The referee immediately decided to send him off and offered United a penalty.

VAR ordered the referee to reconsider his decision to send off Dele. He ran to the touchline screen to double-check and stood by his decision, taking 3 minutes to do so.

Then Fernandes slotted home his penalty to make it 1-0 at Old Trafford, as seen below (via BT Sport & RMC Sport):

A great save from defender Simon Deli, who is duly shown a red card… 🤦‍♂️

Looks like we have a new penalty taker in the house!