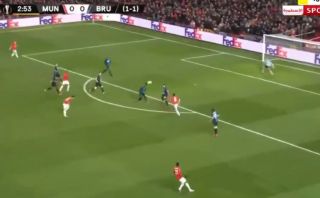 Little touches, always calling for the ball and being one step ahead of the game in the final third. The Portugal international offers United way more quality and we should see more goals as a result.

Fernandes fancies himself from distance. He will shoot whenever the opportunity arises.

That was the case again in the opening minutes against Club Brugge.

Fernandes struck with power and forced a finger-tip save from the Brugge goalkeeper, who managed to flick the ball onto the post, as seen below (footage courtesy of foreign broadcaster / also available on BT Sport):

It’s been end-to-end thus far but United have definitely been the better side in the opening stages.

Solskjaer will want us to be at least one goal ahead at half-time.