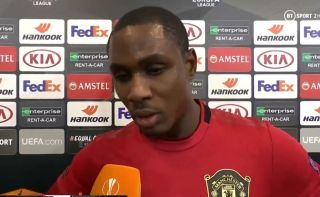 The Nigerian striker scored his first goal for the club tonight, with Juan Mata credited for the assist after a killer pass from new signing Bruno Fernandes.

Pressure can build on strikers when they join new clubs and take time to score their first goal, but Ighalo doesn’t need to worry about that now he’s off the mark.

Before the match, however, we were dealt some bad news after Anthony Martial picked up an injury in training yesterday, hence why he wasn’t in the squad tonight.

But Ighalo stood up and gave a post-match interview to BT Sport after United’s 5-0 win over Brugge.

Check out what Ighalo had to say below:

"It's a great moment. I've been waiting for this. I've played three games, now I've got a goal to start my Manchester United career, with the team I've supported from when I was young."

Ole Gunnar Solskjaer will be delighted as the goal showed a good example of what you want from your centre-forward.

He tapped the ball into the net and showed exactly what United have been lacking inside the box all season.