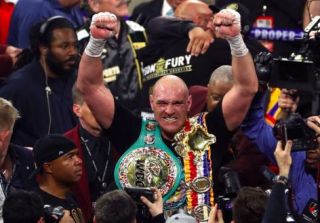 Tyson Fury’s incredible knockout victory over Deontay Wilder in Las Vegas on Saturday completed one of the greatest comebacks in sporting history.

The new WBC world heavyweight champion has gone from the brink of suicide, depression and drug abuse to return to the top of boxing with his remarkable 7th round stoppage at the MGM Grand.

Fury’s story has inspired many, including Manchester United manager Ole Gunnar Solskjaer who has reportedly invited the ‘Gypsy King’ to speak this players at the club’s Carrington training facility.

As a United fan himself, Fury has also been invited to the derby against Manchester City on the 8th March at Old Trafford as a guest of honour.

The Metro report that Fury has been asked to make a speech to United players about his story and could be presented on the pitch at half-time for his achievements.

Fury deserves huge credit for his openness about his mental health problems, and the stigma around the subject is certainly decreasing with top sports stars speaking out about their own troubles.

We hope Fury takes up United’s offer and we can see him get the reception he deserves at Old Trafford for one of the ultimate sporting comebacks.