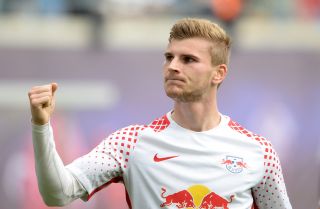 The 23-year-old is widely expected to leave the Bundesliga club during this summer’s transfer window, and Liverpool are currently seen as the front runners for his signature.

In fact, Sky Sports reporter Kaveh Solhekol claims Liverpool will be able to secure Werner in the summer, providing Jurgen Klopp can provide the German a promise of minutes.

Solhekol wrote: “As was seen last month when Erling Braut Haaland chose to move from Red Bull Salzburg to Borussia Dortmund though, the best young players are increasingly looking to move to clubs where they are guaranteed to play.

“If Liverpool can give his representatives the assurances they need, then Werner playing for Liverpool next season becomes a real possibility.”

This immediately sounds off-putting from a football perspective — even if Werner is bound to believe that being a starter at United will be an easier objective to achieve at this moment in time — because it’s not about promising a player game-time, it’s about seeing if the player has the right characteristics to contribute to the team at hand.

However, according to The Athletic, United have also made a proposal for the German as they attempt to bring a new long-term striker to Old Trafford.

The report claims that Barcelona have also made an attempt to secure a deal, but Werner is holding out for a switch to the Scousers as he wants to work under Klopp, so it doesn’t seem like there needs to be much persuading done on their behalf, like Sky Sports suggest.

Werner has scored 27 times and registered 11 assists in 33 appearances for Leipzig this season. He’s a goalscorer and it would be a shame to see him join LFC.