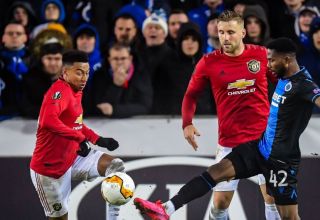 After a hectic week of matches, three in seven days, Manchester United finally had a few days off to prepare for their return leg of the Europa League encounter with Club Brugge on Thursday at Old Trafford.

Although the first martch against Brugge ended in a 1-1 draw, United posses the valuable away goal advantage. If they can hold Club Brugge scoreless, United can secure a place in the round-of-16.

United were victorious the last time they hosted the Belgium side in 2015, winning 3-1 in a Champions League play-off clash. European matches outside of Belgium haven’t been kind to Club Brugge, who have never won an away match in England, drawing two and losing 10 of 12 previous visits.

Manager Ole Gunnar Solskjaer will finally have a rested squad on Thursday and United are expected to start a team similar to last Sunday’s win against Watford.

Sergio Romero is expected to be in goal, hoping to erase the memory of last Thursday’s blinder that awarded Club Brugge their first and only goal.

There are options in defence, although the expected line-up could be very similar to last Sunday. Aaron Wan-Bissaka should return to the line-up after he was an unused sub in Belgium and will be matched up with Eric Bailly, Harry Maguire and either Luke Shaw or Brandon Williams in defence.

The return of Scott McTominay should stabilise the midfield. With McTominay back, possible midfield situation looks pretty strong with the possible line-up of Fernandes, Fred, and McTominay. Fernandes has been in great form since joining United, scoring his first United goal on Sunday.

Like Fernandes, striker Anthony Martial is in a great form, scoring in the last two matches. He is expected to be up front with either Mason Greenwood, Jesse Lingard, who wasn’t even on the bench against Watford or Odion Ighalo.

Both picked up injuries during Club Brugge’s 1-0 victory over Charleroi in the Belgian Pro League on Sunday and are not considered fit enough to travel to Manchester. Defensive midfielder Eder Balanta is also missing due to suspension.