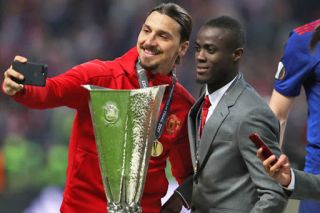 Eric Bailly sat out the 2017 Europa League final through injury and is determined to play a leading role in another cup run.

The Ivorian has his sights set on a second Europa League winners medal, with the defender claiming “nothing is impossible at Manchester United”.

Success in the Europa League will automatically see the Red Devils back in the Champions League again.

As things stand, Ole Gunnar Solskjaer has United back in the hunt for major honours.

A run through to the fifth round of the FA Cup completed by progress to the last-32 of the Europa League.

Tonight the second-leg of our clash with Club Brugge takes place at Old Trafford (kick-off 8pm). The Red Devils played out a 1-1 draw in the first-leg and take an important away goal into the game later on.

Bailly, who missed the 2017 final, sees no reason why Solskjaer’s side cannot remain on course for a trip to Gdansk on May 27.

Speaking to United Review, he said: “First of all, nothing is impossible at Manchester United.

“It would be brilliant if this time we were able to go all the way and I was part of the team in the final. That’s what I’m working towards.

“Manchester United is a club that is used to being in the Champions League year after year, but the Europa League is a competition that not every team gets to be in, so it’s something we’re working hard in.

“Two or three seasons ago we were fortunate enough to go all the way and win it.”

United beat Ajax 2-0 in the final, thanks to goals from Paul Pogba and Henrikh Mkhitaryan.