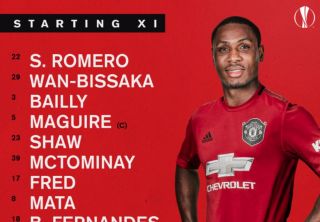 Manchester United have an away goal going into tonight’s Europa League clash at Old Trafford.

The first leg finished 1-1 in Bruges, where Man Utd fans were disappointed by the policing, but tonight in Manchester the ultimate aim is to progress to the latter rounds of the competition as it’s a route into the Champions League.

Anthony Martial scored the equaliser for United against Club Brugge when the teams met recently. Tonight he is rested with Odion Ighalo getting his first start for the club.

Sergio Romero is in-goal, with the defence consisting of Aaron Wan-Bissaka, Eric Bailly, Harry Maguire, Luke Shaw. Bailly has to ease his way back into the team and Maguire is the best partner to do that. He doesn’t need to be rested and, let’s not forget, this is a big game.

It’s great to see Scott McTominay get back into the starting line-up. He is partnered by new signing Bruno Fernandes and Fred, who we felt would be one player to get a rest tonight.

Juan Mata is on the right, with Daniel James in his preferred role on the left, while Ighalo leads the line for the first time.

Check out the full line-up and bench below (via @ManUtd):

As you can see above, Martial doesn’t even make the bench so he is rested ahead of Sunday’s Premier League clash against Everton.