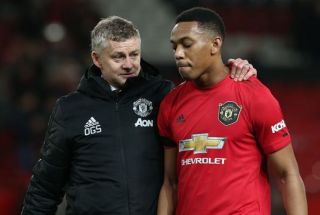 The reason Anthony Martial is out of tonight’s team is not because Ole Gunnar Solskjaer has chosen to rest him, but he didn’t feel right and walked off during yesterday’s training session, as revealed by the manager on MUTV.

“He [Martial] didn’t feel right after the training yesterday, or he walked off during the training. He is injured but hopefully not too bad. I don’t really know yet how bad it will be,” Solskjaer said (via Manchester Evening News).

That doesn’t sound very promising with Solskjaer’s record at commenting on injuries. His comments suggest he doesn’t have a clue — and surely they’d know by know if it was nothing?

The Frenchman is in top form at the moment and it would be a blow if he was to miss Sunday’s clash against Everton.

Tonight we get to see Odion Ighalo make this first Manchester United start. He has yet to score a goal but hopefully that will come tonight. He appears to love being a United player and that’s nice to see.

“[Ighalo] is focused, been looking forward to this. We must play well and create chances for him to go through,” the boss added.

“Odion is focused — he’s been looking forward to this.” 🙌

The Red Devils have been boosted by the return of Scott McTominay for the match, with the midfielder out since picking up an injury on Boxing Day, and Solskjaer is happy to have him back.

“They need the minutes, but they deserve to play. Eric did really well against Chelsea and Scott has been fantastic all season, but it is not a game to just give minutes, we want to win the game and win it well.”

It’s too early for Solskjaer to throw all of his eggs in one basket. United need to get over the next hurdle of Premier League fixtures and ensure they’re still in the Europa League. It would be fantastic if we finished in the top four and won this competition outright.

Ole would definitely keep the job then.