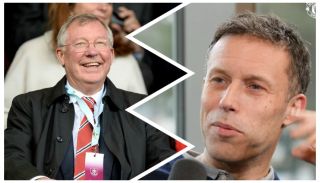 Former Manchester United manager Sir Alex Ferguson enjoyed listening in on an argument in the Liverpool dressing room at Anfield, it has been revealed.

The Red Devils won a crucial game at Anfield in 1997 — a result that proved decisive in the Premier League race that season, when Liverpool’s wait for Premier League success was in full swing.

And who wouldn’t? The tables have turned for now, sadly with Jurgen Klopp being the one laughing…

Ex-Man Utd defender Ronny Johnsen explained what happened in an interview on the official Manchester United podcast, claiming Fergie hushed his players so he could hear everything.

“We came into the changing room and the gaffer came in a little bit late,” Johnsen said.

“We were buzzing and he said: ‘Quiet, quiet! The changing rooms in the stadium are very close to each other and you can hear their manager go ballistic and (Ferguson) is like: ‘Listen, you can hear them!’

David May laughed, responding “that was so good!”

The official podcast is definitely worth listening for anecdotes like this alone.

Fergie enjoyed nothing more than knocking Liverpool off their perch, and 7-years after his retirement they will win their first league title in 30 years.

Darker times for sure.