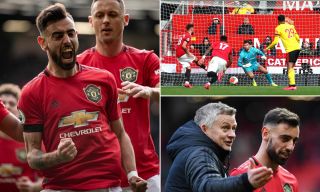 Bruno Fernandes has made an instant impact since joining Manchester United last month.

With man of the match awards already under his belt, as well as one goal and three assists, Fernandes immediately looks like a proper United player.

Ole Gunnar Solskjaer was joined by Luke Shaw when he addressed the media this evening.

The Norwegian was keen to talk about his new signing, saying (via Manchester Evening News): “We feel we’ve added some x-factor quality with Bruno. Anthony coming back, he was out for a couple of months, means he’s getting used to the no.9 position.

“Scott has developed but Nemanja and Fred have done well. The addition of Bruno gives us a bit of a different flavour. He likes to play forward passes and take risks, which a Man United player should do.”

“Everyone has been impressed with the immediate impact Fernandes has made, including Solskjaer, who added: “His imagination and his over view, picture, is a couple of seconds ahead of many players. It is one of his strengths he knows what he wants to do. He can change his mind in a split-second. That composure has been important.”

Moreover, Solskjaer feels Fernandes will get better over time, now that he’s in the process of adapting to stronger league.

“I think Bruno will only improve by coming here to a stronger league, stronger opponents and stronger teammates, getting used to us.

“We went to develop that x-factor. He’s come in and impressed everyone but we don’t want to put a limit on what he can do.”

Statistics show how Fernandes is dragging Solskjaer’s side up the pitch with a high percentage of forward passes. This comes as a relief after years of watching United midfielders looking back towards their defence too often.

Fernandes opened the scoring for United just before half-time against Watford last weekend. He played a part in all three goals for the Red Devils — assisting Anthony Martial and Mason Greenwood.

Man of the match.
Alpha. pic.twitter.com/zCJg3HFWdB

His aggression off the ball offers United something different in the final third.