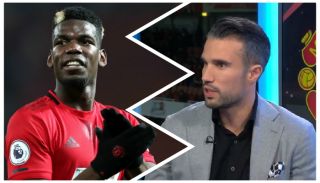 Robin van Persie has urged Ole Gunnar Solskjaer to conduct an interview with Paul Pogba to address his long-term future at Manchester United.

Pogba is currently out injured but continues to be linked with a move away from Old Trafford in the summer.

His agent Mino Raiola takes no prisoners when speaking out about his clients and has threatened that Pogba will evaluate his future once the European Championship is over this summer, meaning United could be involved in a dragged out saga.

Raiola still insists the French midfielder is committed to United despite recently suggesting he would welcome a return to Italy, as per Sky Sports, but no-one believes he has shown any loyalty towards the club.

If Pogba was committed to United he would have said that a long time ago when speculation over his future began, but instead he choose to let his agent do the talking and signal at a potential exit.

Van Persie admits this is a difficult situation for the midfielder, but believes the issue could be resolved if United carry out an interview with Pogba himself.

“Pogba, in my opinion, is a world-class player, he has proven it over the years. He has it all.

“But first, I think with him, and that’s after a couple of years now, I think he should come out and he should say what his favourite position is. If that’s done, then people can judge him based on his position. Now, I don’t think people really know if he’s a six, if he’s a number 10… that’s a big difference.

“Then, you have the second subject: is he happy there? There’s constantly rumours, you have the agent constantly giving interviews, you have the coach answering questions almost every day, every week. There’s a lot going on beside the main event, and the most important thing is football.

“I know how it works, especially if you’re injured. People can’t judge you on your game, so they start to talk about other things.

“I think for Pogba, and Manchester, it would be best to… I don’t know, do an interview together or something, together with the coach, and just say, ‘Listen: this is what I want, this is where I would like to play – judge me on that. I’m happy, or I’m not happy, or whatever’. Now, it’s a lot of questions going around.”

We can’t help but think Pogba has brought all of this uncertainty on himself. It would be easy to come out, say you’re here for the long-term, but he hasn’t done that.

This could turn circus-esque in the summer.