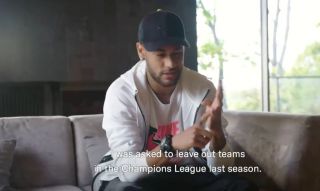 The Round of 16 of the Champions League is nearly halfway complete and there’s already been several surprising results, such as Paris Saint-Germain’s 2-1 loss to Borussia Dortmund.

Many of the game’s biggest names are battling it out for European glory, including PSG’s Neymar, while many are watching it from the comfort of their homes, or some fancy place out in Dubai…

In a video posted on the OTRO Twitter account, Neymar revealed his top four players who are not in the Champions League this year.

The Top 4 players not in the @ChampionsLeague according to @neymarjr 👊 Do you agree with his picks? #UCL pic.twitter.com/awKhleYM4e

Neymar selects Manchester United’s Paul Pogba who he described as “one of the most skilled athletes, one of the best in the world, in my opinion, in his position today.”

His second pick was ex-United player Zlatan Ibrahimovic who makes the list despite being 38-years-old.

Pogba is likely to be playing Champions League football next season — with or without United.