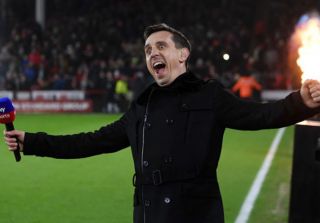 Having gone behind to an early Gini Wijanladum header, the Hammers responded immediately through a headed goal by Issa Diop, who was linked with a move to Old Trafford this year (via The Sun).

And the night was to get better for David Moyes’ side after half-time when they completed the turnaround to get 2-1 up courtesy of a wonderful finish by midfielder Pablo Fornals.

At this point, it looked like West Ham were about to pull off one of the shocks of the season and become the first side to beat Liverpool in the Premier League this term, so Neville took to Twitter.

Whilst working in the Sky Sports studio alongside ex-Liverpool defender Jamie Carragher, Neville decided to poke fun at his colleague by posting a video of himself laughing at the fact that Liverpool could be in danger of blowing their staggering lead at the top of the table.

Neville said: “Tune in, tune in! This mob are blowing it. They are throwing it away. They are bottling it again!”

Unfortunately, though, Neville’s fun came to end quickly with goals from Mohamed Salah and Sadio Mane and they secured all three points again.

Not going to lie… I was watching the game last night hoping that we’d see a different outcome before West Ham faded away, and it was a matter of false hope getting the better of us!