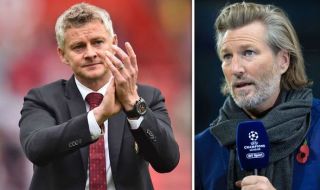 Robbie Savage has made a bold claim that three major signings could transform Manchester United into potential title challengers.

The Red Devils have been so inconsistent this season as they hope to push for a top-four finish with eleven games remaining.

Ex-United youth player Savage believes that Ole Gunnar Solskjaer needs a cash injection of £250m to transform his side into strong competition for the likes of Liverpool and Man City.

“If Solskjaer was handed £250m to go out and sign central defender Kalidou Koulibaly, playmaker Jack Grealish and Jadon Sancho up front, Solskjaer’s best team would be capable of giving Liverpool and Manchester City a run for their money next season.

“In an earlier column this season, I said United were miles away from Liverpool and City.

“But if they can beat other clubs to those major signings — and Champions League football would be the best way to do that — I now think a return towards the top end is achievable with one good summer in the transfer market.

“And they are the only side to have taken a point from Liverpool in the Premier League.

“It’s taken seven years, since Sir Alex Ferguson’s retirement, to reach this stage, but I’m calling it now. Land those big signings in the summer, and Manchester United will be back in business.”

Sancho, 19, may not have any many options as you would imagine in the summer. Duncan Castles claims United is the most likely destination for the England international, while Liverpool feel he is overpriced.

Villa captain is doing all he can to help his side avoid relegation, though that happening would make it easier to land the talented playmaker.

And, finally, Koulibaly of Napoli. Without question the missing piece to our defence.