Ole Gunnar Solskjaer is expected to make several changes to his Manchester United side for the Europa League last 32 second-leg clash against Club Brugge at Old Trafford.

Anthony Martial’s vital away goal makes United hot favourites to reach the last 16, and their opponents have been dealt a further blow with the news that two of their most influential players will not feature.

United should be looking to build momentum after the routine victory over Watford, but rotation is also key with the Reds travelling to Goodison Park to face Everton just three days later.

Solskjaer opted with the five-at-the-back formation for the first-leg in Bruges but should revert back to his preferred system with the onus on United to get the job done at Old Trafford.

Sergio Romero will return in goal in place of David De Gea, and Eric Bailly could return to the starting eleven after picking up a minor knock in his comeback against Chelsea.

Luke Shaw deserves to retain his place at left-back after some excellent performances in recent weeks.

The midfielder looked sharp in his brief cameo against Watford on Sunday and looks ready to return to the starting eleven.

Solskjaer also has a dilemma whether to rest Bruno Fernandes as he did in the first-leg, and again give the nod to Jesse Lingard or Andreas Pereira in midfield.

Fernandes’ impact in his 10 minute cameo in Belgium was far greater than Lingard’s in attacking midfield and Solskjaer may be tempted to keep him in attacking midfield to hopefully finish off the tie. But he will also have one eye on the Everton fixture with the race for Champions League places hotting up and the out-of-form Lingard or Pereira could start with Fernandes rested.

Odion Ighalo could make his first Manchester United start after a string of cameos from the substitutes bench. Anthony Martial is in fine goalscoring form, netting three times in his last three games, but needs to managed carefully by the United boss. 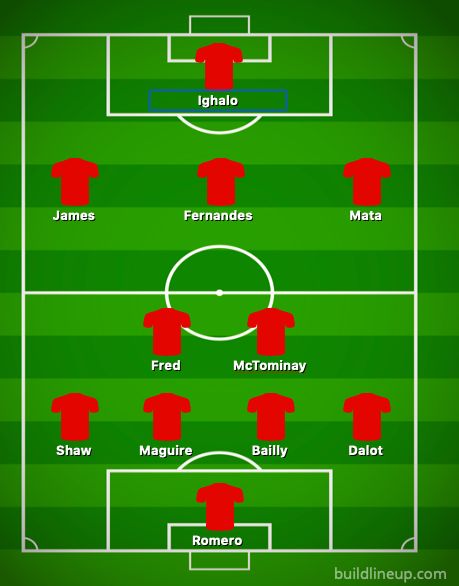