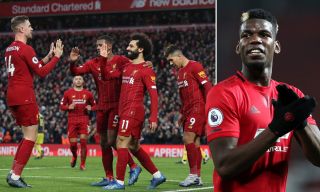 Paul Pogba has been impressed by Liverpool over the last few years and has praised Manchester United’s fiercest rivals.

The Frenchman concedes that the Scousers “deserve” the Premier League title this season, and claims they have improved a lot over the last two years, but clearly he doesn’t “want” to see Jurgen Klopp’s men win it.

Pogba would have believed there was a chance of him winning the league title during his time at Old Trafford, but we’re closer to achieving that than we were in 2016 when he came back from Juventus.

It’s not easy being a United fan and watching up trying to catch up with our two biggest rivals — Liverpool and Man City — but we’ve had our days in the sunshine and they will return again, at some point.

“They are so way ahead of everyone else,” Pogba told ESPN. “They have not lost a single game yet this season in the league. They already have one hand on the Premier League trophy.

“As a Manchester United player and with the rivalry between us, we don’t want them to win the title. We don’t want anyone else to win apart from us, but as a football lover and a respectful player to opposition team, I have to say that they deserve to be where they are today.

“They have been better than last season when they won the Champions League and the season before when they [lost the final to Real Madrid].”

To give credit where it’s due, Liverpool have been the best team in the Premier League this season. After years of good recruitment Klopp now has a squad with strength in all departments, making them a force to be reckoned with for the foreseeable future.

Unfortunately they are destined to win the Premier League this season in what will be their first league title in 30 years, and they are still in with a chance of winning the FA Cup and Champions League.

Pogba’s comments wouldn’t irritate me usually, but he has nice things to say about United’s rivals and not United… That doesn’t quite hit home I’m afraid.