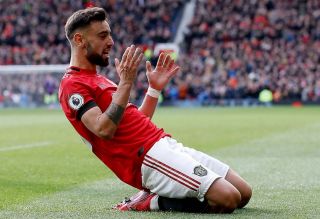 Manchester United fans couldn’t have asked for a better to start for Bruno Fernandes.

The Portugal midfielder arrived in January with plenty of hype and expectation, but has shown glimpses in just three appearances of the true difference he can make to Ole Gunnar Solskjaer’s side.

Fernandes scored and got an assist in the routine 3-0 victory over Watford at Old Trafford on Sunday, where United earned their third league clean sheet in a row.

Former Liverpool and Aston Villa forward Stan Collymore has been impressed with Bruno for hitting the ground running, but thinks the midfielders around him need to be upgraded.

“But Ed Woodward and Ole Gunnar Solskjaer must now add an upgrade on Scott McTominay and Fred in the defensive midfield who will allow him to go and play and be as creative as he can be.”

Collymore is slightly harsh here on McTominay and Fred who have been two of United’s more impressive performers this season. But a defensive midfielder with more quality on the ball would improve Solskjaer’s side, as it would allow for smooth transition in attack with Fernandes at the forefront.

Defensive midfield is an area United need to consider strengthening, but there are other positions that should be prioritised in the immediate future.

The Reds need a goalscoring striker after missing out on Erling Haaland in January and a winger to provide some natural width to the right-flank and balance to Solskjaer’s setup.