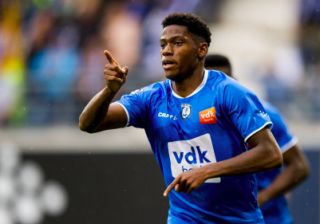 As reported by the Daily Mail, Ole Gunnar Solskjaer is monitoring the striker, who has been in fine form in the Belgian league this season.

David, a Canadian international, has scored an impressive 22 times for Gent this season and can operate in a variety of different positions in attack.

He has already been handed the nickname ‘Iceman’ for his coolness and composure in front of goal and has netted nine times in his last six Belgian league appearances.

David won the Canadian player of the year award after scoring 11 goals in 12 games for his nation.

It will be interesting to keep an eye out on David who will be in action against Roma in the Europa League on Thursday.

Solskjaer needs to prioritise a goalscoring forward this summer after letting go of Romelu Lukaku and deciding against signing Erling Haaland.

While David has not yet proven himself over a sustained period, the £18m value he is said to be rated at seems reasonable for his prolific goalscoring record this season.