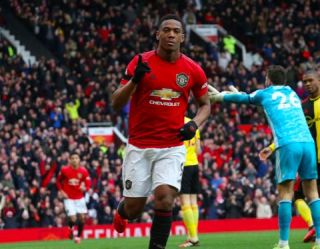 Manchester United fans are first to provide backing for their players – especially when they are being compared to a direct rival.

But even the most bullish of United fans wouldn’t agree with this eternally optimistic supporter.

One Red has claimed that Anthony Martial is better than Liverpool forward Roberto Firmino, and has provided plenty of evidence in his argument in a long twitter thread.

‘Martial FC’ is a well known subsection of die-hard followers of the Frenchman on United twitter and this member has gone to extreme lengths to prove his favourite player is better than Liverpool’s Brazilian star.

If we are looking at goalscoring records alone, Martial has 10 in the league this season whereas Firmino has had to settle for just eight.

But it’s the impact that Firmino has on Jurgen Klopp’s side that makes him such a complete player. Firmino is the player that gets the best out of Sadio Mane and Mo Salah, who are always at the end of the chances in the Liverpool system.

As much as it pains United fans, the 28-year-old has been a key figure in Liverpool romping to their first league title in 30 years.

While Martial still has potential to develop and improve further, he has not yet reached the level of Firmino.

Check out some of this fan’s arguments for Martial, however, in a lengthy twitter thread:

Although it doesn’t change the fact that Firmino still outdoes him in terms of G/A with him having 15 compared to Martial who has 13 combined. Martial is still only 2 away which isn’t even that much acknowledging again he has played 5 less games

Considering Firmino has proven goalscorers like Mane and Salah that he can pass the ball to and get his assists from playing beside him. For example being players that both won the golden boot last season scoring 24 goals pic.twitter.com/8iDnusHVMU

“ThEy sCoReD tHaT mAnY gOaLs bEaCaUsE oF hiM”

Firmino only had 6 assists in the league that season pic.twitter.com/MldpslDnWA

And in the same season Firmino sat at 16th scoring 12 goals in the league which by the way Martial was 2 goals away from despite playing 7 less games as a left winger pic.twitter.com/wYWUBjy8Oy

On the other hand Martial has never had any luck with the quality of players he has around him for example the likes of Pereira,Lingard,Mata(past his best)being his main sources of creativity most of his career and this season with not a good enough RW and Rashford being injured